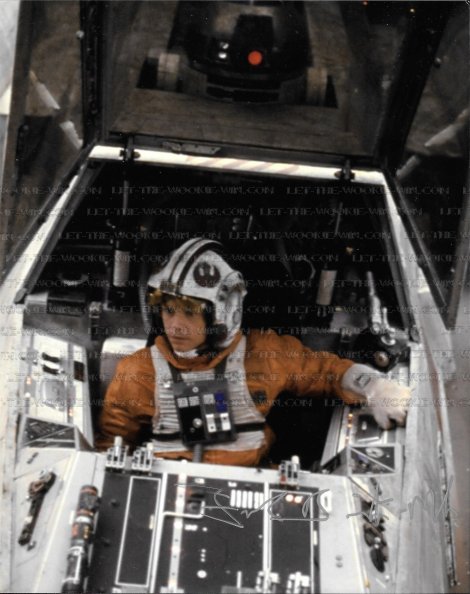 About my Francis Billington Marks Autograph

This is a somewhat strange autograph to have and i am not sure I would have added this gut if it was not for my collecting buddy Greg getting him for me
I know for sure that Francis Billington Marks was in fact a dresser on Empire strikes back and did some props work on Return of the Jedi.

So you would think, what is wrong with that right ?

So here is the issue and the controversy, Mr Marks was very much a stable mate and long time friend of Lightning Bear, for those who are unaware of lightning Bear, he was a self professed stuntman who falsely claimed to have been a biker scout and a stormtrooper

These claims have been without doubt proved false and total fantasy over the years by the testimony of many actors, film crew and legitimate stunt guys that were actually there.

This is where Mr Billington Marks enters the story, he adamantly vouched for Lightning Bears authenticity in return of the Jedi, which brings his character very much into question

Basically Bear was at this convention where he was selling autographed photos of stormtroopers, including the one of them firing at Luke and Leia in the chasm. Basically when Peter Diamond saw this, he asked him who he was and he apparently pointed to the photo and said "That's me..." Diamond said that no, it was not him, as he was the one in that costume."

I have been asked about Lightning Bear before, so I did as thorough a check as possible, asking many actors, stunt people, and crew. Even more to the point, I researched all of the Return of the Jedi Daily Call sheets that list the name of everyone--major actors, stunt people, background players--who will be needed on set each day, and what time they will be needed. I can confirm for you that Lightning Bear's name does NOT appear on any of the daily sheets. Nor did anyone I talk to have a firm recollection of him at all being connected to the filming. And he is nowhere in the credits. Those are the facts. I will let you draw your own conclusions.

There is a lot more involved with the relationship between Francis Billington marks and Lightning Bear, which any of you can google and come to your own conclusions, needless to say it is a signature that courts a fair amount of controversy

Albums
Empire Strikes Back
Return of the Jedi