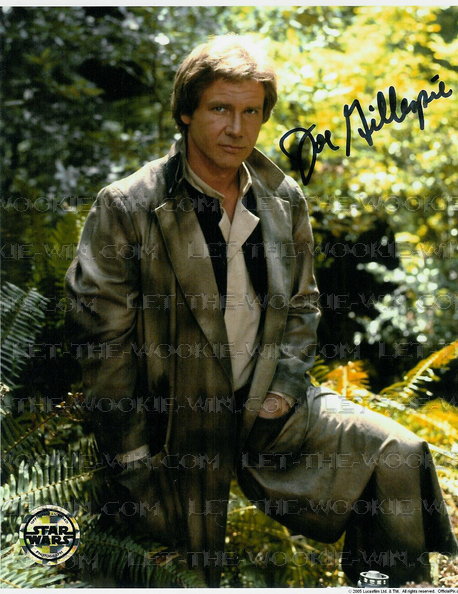 About my Joe Gillespie Autograph

Another very out of the ordinary signature this is an Image of Harrison Ford that's been signed by Joe Gillespie.

Mr Gillespie was a resident of the Redwood region of California that Return of the Jedi was filmed in, he was at the time a science teacher at the local Middle School and got the job by having the right height and the same hair color as Harrison Ford.

He Recalls being excited at the thought of meeting Ford and remembers saying to him, "Hey, I'm your stand-in,'" Ford just looked the other way ." At the end of shooting, Ford eventually apologized for the snub and bought Mr Gillespie a drink.

Mr Gillespie remembers occasionally helping out on set,during the attack on the Imperial bunker on Endor, he and others had to throw handfuls of arrows to achieve the look of hundreds of Ewoks shooting off arrows at stormtroopers.

Mr Gillespie even remembers,the cast was always hanging around, and he even knocked elbows literally with some of the little people dancing at a bar in the town, he recalls that for the most part the famous actors were friendly, which was very cool All in all this is a very cool addition to my collection.

Information about this Joe Gillespie image