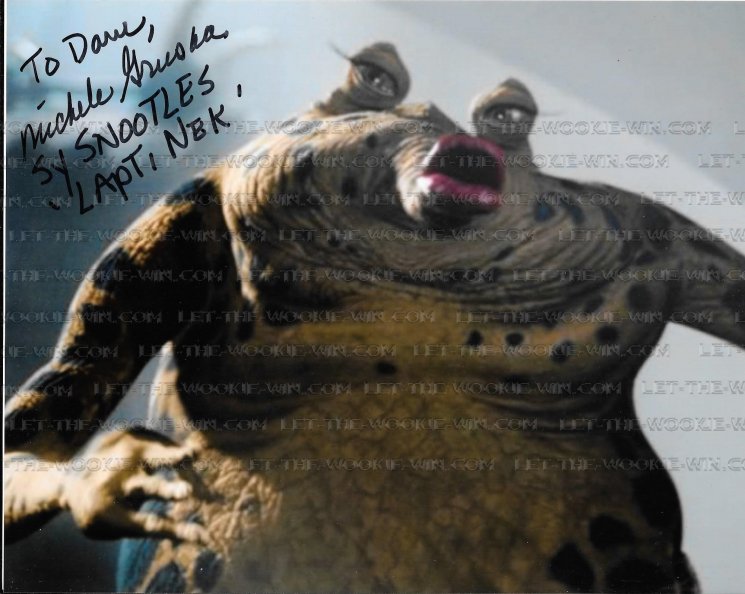 About my Michelle Gruska Autograph

I love this Graph just because of all the controversy surrounding it.
The image of Sy Snootle has been signed by singer Michele Gruska, however her version was not the one used in the final cut of the film if you believe popular myth.
A little more can be explained by this report from another star wars page

"Curiously, Lucas—or at any rate somebody at Lucasfilm—also had a professional singer, Michele Gruska, come in to sing a more polished version of the track. In a 2011 Crawdaddy article archived for posterity on this site, Gruska claims that it was her version that would have gone into the film itself—but because Arbogast was, shall we say, "friendly" with Lucas, it was her version, and not Gruska's, that made the final cut:

“My version was definitely going in the scene,” Gruska maintains. “But unfortunately at the time the rumor was Anne was keeping company with George Lucas. Oh well.”

Whether there's truth to Gruska's claim or not, it was her version of "Lapti Nek" that ultimately appeared as a commercial release. The word is that Arbogast's original recording was lost, which is why it didn't appear on Return of the Jedi's soundtrack album, nor the Polygram five-minute club mix released in 1983, or the 12-inch "Lapti Nek Overture" record released by Warner, also in 1983. ("Lapti Nek Overture" was performed by the band Urth, fronted by Joseph Williams, son of John and also lead singer of the more famous rock outfit, Toto. Told you this is a curious story.)

All very interesting if you ask me

Information about this Michelle Gruska image