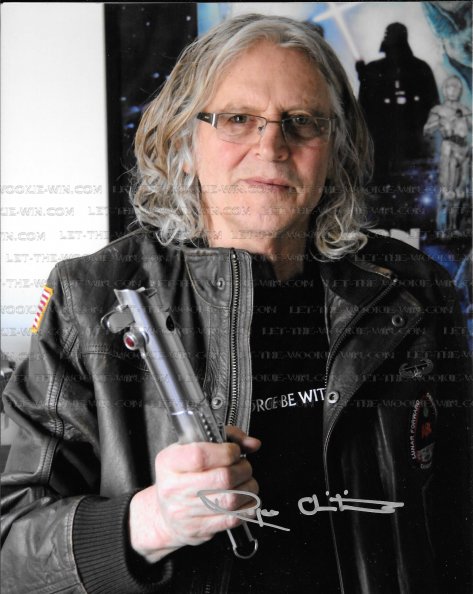 About my Roger Christian Autograph

I love how cool this image has come out, this is Roger Christian, Mr Christian is pretty much Star wars royalty and responsible for so much we take for granted in the original trilogy
This up to date image shows Roger posing with a lightsaber, which he pretty much is responsible for creating in the first place.
Here is the story in Mr Christians own words .” It was literally the first box I pulled out and pushed the dust off the top of it and opened it.
And in the tissue paper there was this Graflex., I just took it out and knew that I had found the holy grail.
It looked so beautiful. It had the red firing button, it had another button, and it was weighty and exactly the right size.
So I got in my car and ran back to the studios. I thought, I’ve got to have a handle. So I stuck the t-strip that I’d used for the handle of the stormtroopers’ weapon. I stuck that around the handle.
I had broken-down calculators, and I loved the little bubble strip which illuminated the numbers underneath, and magnified them so you could read it on the screen.
That fit perfectly into the clip.
And I called George over and he just held it and smiled.
That’s the biggest approval from George that you can get.
He doesn’t have to say, “That’s great,” or “Do this.” The only thing we agreed was [Luke] wouldn’t use it in Tunisia, but he would have to hang it on his belt.
So I stuck a d-ring on the end of it, and that was it. Then I made five or six of them.
The two that I made went out to Tunisia, and then that’s the one that Obi-Wan brings out of his box and gives to Luke.
Big thank you to my friends Ben and Dave for helping with this

Information about this Roger Christian image